The cruise ship Diamond Princess, which has been in quarantine in port in Yokohama since February 4, 2020. Screencap from Nippon TV YouTube channel. Image from Global Voices

Japan edges ever closer to a COVID-19 epidemic

February has seen Japan edge ever closer to experiencing a COVID-19 epidemic as the country now hosts the second-largest cluster of confirmed cases in the world, after the People’s Republic of China.

As of February 17, the World Health Organization (WHO) reported that there were 59 confirmed cases and one death in Japan of COVID-19, the disease caused by the strain of coronavirus that originated in Wuhan, China, in December 2019. In 33 of the 59 cases, infection occurred outside of China, meaning the virus is now being spread person-to-person in Japan.

While Singapore has a higher number of infected individuals than Japan (75 as of February 17), the official WHO statistics for Japan do not include the cluster of COVID-19 infections on the Diamond Princess, the cruise quarantined at a berth in the port of Yokohama since February 4.

As of February 17, there were 454 confirmed cases of COVID-19 among the Diamond Princess’ 3,700 passengers and crew. As a 14-day quarantine progressed with an increasing number of passengers falling sick despite their isolation, pressure has mounted on the Japanese government to resolve the situation.

On February 16, with the sickest passengers having been removed from Diamond Princess to be treated in hospital in Japan, some foreign nationals started to be repatriated and flown home by their respective governments.

Matthew Smith, an American passenger with a large following on Twitter, decided to remain on the ship rather than return on the repatriation flight to the United States. Smith stated he chose to stay in quarantine on the Diamond Princess because American cruise ship passengers who had tested positive for the virus were “mixed” with healthy passengers on the repatriation flight, increasing the risk of infection and defeating the purpose of the quarantine.

Smith also highlighted the plight of the ship’s crew, who has been exposed to the virus as they served the needs of passengers since February 4, and will likely need to be quarantined themselves:

On February 10, some Indian members of the crew posted a Facebook video in a plea to be released from the ship, stating there was little to no information about how many crew members were infected. 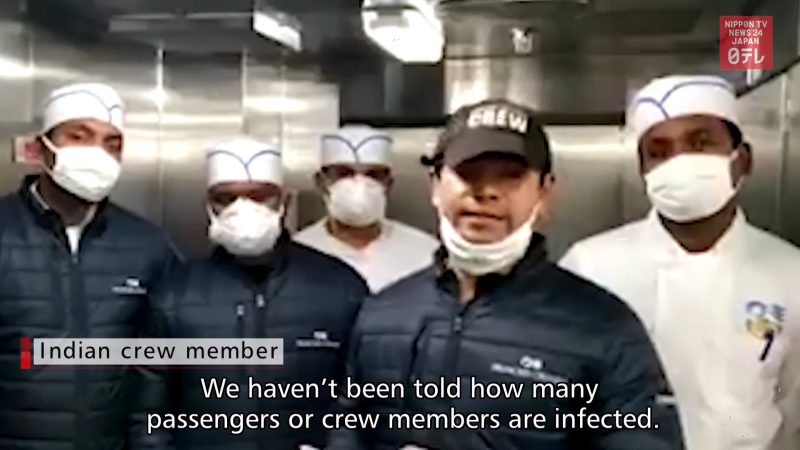 Diamond Princess crew members make a video pleading for help from the Indian government on February 10, 2020. Screencap from YouTube. The original Facebook video can be found here.

Meanwhile, the likelihood of a potential epidemic within Japan has slowly started to sink in. On February 13, an 80-year-old woman died, becoming the country’s first victim of COVID-19.

Quite a bit of disagreement on the front pages today over how big a deal to make of the first coronavirus death in Japan.

The next day, the Japanese government set up a special task force that included infectious disease experts to deal with the potential spread of the coronavirus. At the same time, Health Minister Kato Katsunobu declared Japan had entered a “new phase” of the outbreak.

An unattributed photo of the grim faces of the task force was widely shared on Twitter:

A look of despair on the faces of the coronavirus task force.

Prominent events in Japan are being canceled. By February 14, Japan’s largest camera trade show was canceled due to the outbreak. The Tokyo Marathon has also been closed to all registrants, save for Olympic hopefuls. There will be no refund of registration fees. Other events, such as tech conferences, are also being paused.

Meanwhile, Japan’s booming tourism industry has been walloped by a travel ban the Chinese government has imposed on its citizens.

After the Japanese Health Minister advised people to “avoid public places,” Japanese businesses have struggled to cope with the outbreak. Employers such as online publisher Cookpad and national telecom provider NTT are making arrangements for employees to work from home — a practice that is almost unheard of in Japan.

According to FNN News, however, due to the relative inflexibility of workplace rules around sick leave, some of those infected by the coronavirus may be faced with staying home and not getting paid, or going to work when sick.

If a worker gets infected by the coronavirus and is required to stay away from work as required by prefectural workplace restrictions (put in place to deal with the coronavirus), the absence won’t be regarded as “mandatory, as directed by the employer.” So, (in this case) employers would not be required to pay infected workers their normal salary. < — This means that once your paid leave is all used up, you’ll have to go back to work. How stupid is that?

Amidst the threat of a looming epidemic, the Japanese government’s greatest concern appears to be ensuring the 2020 Summer Olympics in Tokyo, due to open on July 24, go ahead. Both the International Organizing Committee (IOC) and the government of Japan insist the Olympics will go on as scheduled, despite the threat of the coronavirus.

There is also increasing pressure for Japan to close its air and sea borders with China, despite being applauded so far for its heart-warming support of China compared to the United States.

After Japanese navy ships were turned away from Micronesia and the Marshall Islands because of fears of the disease, Sato Masahisa, Japan’s bellicose and ultraconservative junior minister of foreign affairs, and a member of the government’s COVID-19 task force, suggested that urgent debate is needed about restricting travel into Japan from China.

Japan is now regarded as an “infected country.” There might be a lot of people who think the idea is crazy, but it’s now the reality. Japan is being treated just like that cruise ship [turned away from Hong Kong, Thailand and Cambodia]. If we don’t do something about the situation, the Tokyo Olympics will surely be impacted. While it may be a bit late to point this out, at the same time we are taking plans domestically, we also need to urgently consider limiting entry to Japan from China.

Most Japanese people, however, are trying to navigate day to day life under the looming shadow of an epidemic. One woman, for example, has thought about how to wear a mask while wearing glasses:

[…] Here’s a way to prevent your glasses from fogging up while wearing a mask. […] It’s really awesome: just fold the top of the mask inward! It’s an easy way to prevent fogging up, and feels comfortable.