Music is popular in Tanzania. Now, COVID-19 is keeping people from gathering in huge groups like this to listen to it. Photo from Leka Dutigite concert in Kigoma in 2012. Photo by Pernille Bærendtsen, used with permission. Image from GlobalVoices

As COVID-19 sweeps through Africa, musicians have taken a hit with canceled concerts, festivals, tours and interrupted studio time.

Yet, musicians have also risen to the challenge by composing catchy tunes to raise awareness and inspire hope, while others have seized the moment to capture their fans’ attention to send other messages. As always, musicians are on the move. And their work is global. Music is universal.

From West to East Africa, a new genre of “corona” songs merge the global with local as musicians adapt creative messages with unique musical styles.

These songs and videos mirror social life and issues that directly engage listeners. They express concerns and passions — but may also present contradictions. Many seem to have been produced at breakneck speed, circulating on Instagram and YouTube as musicians rush to meet the corona moment.

And a long history of “infotainment” songs — often propped up by the international development world — may have also prepared musicians for this moment.

Here’s a shortlist of new “corona” songs currently coming out of East Africa:

Mzee wa Bwax gives us a corona song in the singeli style — a genre that grew out of the jerry-rigged beats of groups like Jagwa. This is music from Uswahilini — the areas of Dar es Salaam where people live closely together. The video clearly visualizes the problems with a lack of sanitation and social distance in markets and inside dala-dala (public vans):

Rapper Khaligraph Jones’ corona freestyle aims at Kenyans not taking the coronavirus and self-isolation seriously. But this is not your typical infotainment song — rather, he uses corona to diss other rappers and as a burn against socialite, Huddah Monroe:

Zenji Boy comes through with a Zenji Flava song and video that calls on God to help the doctors and nurses as they attempt to treat this virus without a cure. Produced through Stone Town Records, the song is laced with preventive measures, warning listeners to refrain from shaking hands and hugging. The title of the song, and the refrain, “corona inauwa,”  Swahili for “corona kills,” warns listeners to take the prevention measures seriously:

This gospel singer’s corona song and video tell the story of a friend who is married to a European man. He suffers from coughing and difficulty breathing — and then he dies. The doctor concludes the coronavirus as the cause. Gait’s message is that “God is in control,” and that “itkuwa sawa,” Swahili for “it will be okay.” Although the song and video include advice on prevention, his strong message of faith paired with dramatic visuals may add to the confusion:

DannyP’s song was among the first corona-inspired tunes released in East Africa, on March 5. It has an upbeat Kamba sound, and the video features a dance involving characters wearing face masks, more of a corona fashion statement than an advisable preventive action. The song suggests solutions such as President Uhuru Kenyatta restricting Chinese from entering Kenya, — and calling upon God.

An industry in crisis

Even as musicians rush to produce hits that inform and inspire, the music industry in East Africa has faltered as travel and global commerce have come to a halt.

Major music festivals in Africa have announced cancellations such as the Cape Town Jazz Festival in South Africa, MTN Bushfire Festival in eSwatini, Atlantic Music Expo in Cape Verde and Blankets and Wine in Kenya, according to Jess White of Akum Agency.

Many musicians have lamented the loss of essential income from concerts, tours and festival gigs. Venue owners and agents have also worried about their future of musical projects, series, and programs.

Kenyan musician Makadem is currently stranded in Denmark, where he’ll give a concert on March 28, with support from an artistic relief program that offers free live-stream productions to musicians affected by corona related cancellations.

On March 25, the South African government announced a “cash injection” for creatives and entertainers in an attempt to curb the blow in the amount of $860,000 earmarked for those affected by COVID-19-related restrictions within South Africa.

Priority will be given to artists who were booked to perform at state-funded events as well as other “legends” in the industry, according to Music in Africa.

Is that it? Money for legends, people who were booked for government events and emerging artists fight for the scraps at provincial levels… what about other layers of the industry?

Indeed, musicians in other African countries have not been offered any type of government support or sponsorship for lost income due to COVID-19 restrictions. 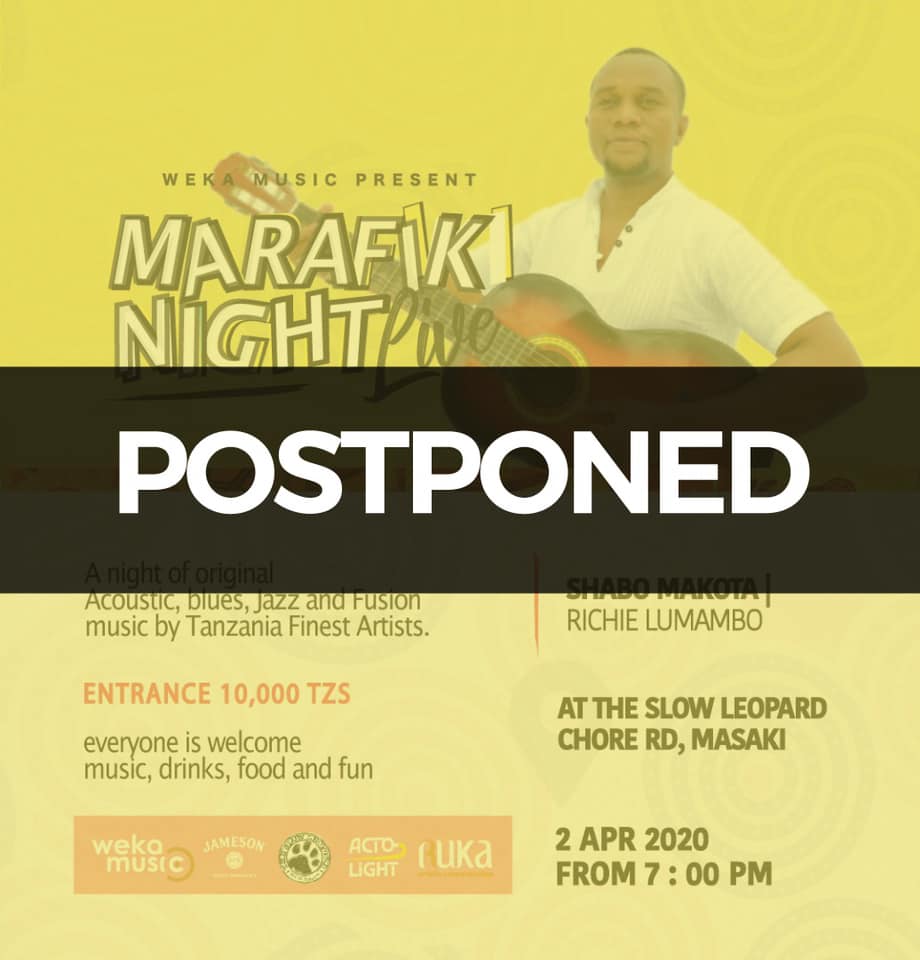 Issac Peter Abeneko, a performing artist from Tanzania, has dropped two new songs and urged his fans to follow him on YouTube after he lost a major European tour due to the coronavirus. Abeneko, who runs the famous music series, Marafiki Live, in Dar es Salaam, also appealed to fans for funds to keep the popular series going, along with a public health message:

We are looking forward to resuming the Marafiki Night Live after the current situation got improved, we shall all work together highly to reduce the rapid spread of the Covid-19 outbreak.

As musicians in East Africa and across the continent attempt to pivot in this new paradigm, the industry already mourns the loss of legends.

The coronavirus has claimed the life of musical giant Manu Dibango, a revered jazz saxophonist from Cameroon:

And Aurlus Mabele, known as the king of Congolese soukous music:

In Denmark, the first reported corona-related death was Kwabena Maanu — originally born in Ghana, and later a Danish citizen. Many, among others, the journalist Søren Villemoes paid tribute to Maanu’s contribution to spreading African music in Denmark:

In the TV2 News at 19:00 I will talk about one of our first victims of corona, always happy Kwabena Maanu, who was my dad’s close friend, and whom I’ve known since I was a child. He brought African music to Denmark in the 1980s. A true legend. Rest In Power.